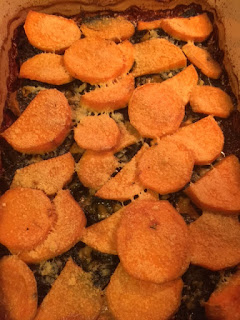 I could never be a total vegetarian.  But there are so many vegetarian recipes that I love.  This is one of them.  Here it is, just out of the oven.  The top and bottom layers are thinly sliced sweet potatoes.  In between is a delicious layer of swiss chard combined with garlic, shallots, and fresh thyme.  Covered with a sauce of heavy cream, white wine and a topping of parmesan, this one is a real winner!
Posted by Sherry at 6:54 PM 1 comment:

Making my pear and parsnip soup recipe is quick and easy and tastes great on cool evenings.

2 boxes (32 oz.) Wegmans organic chicken broth (or use your own)
4 fresh parsnips, peeled and sliced
4 fresh pears, peeled and chopped

Prepare the parsnips and pears and combine in a large pot with the chicken broth.  Cook until tender.  Using a blender or hand held blender, puree until the pieces are well blended.

That's it!  It is now ready to enjoy.  You can add salt and pepper as desired. 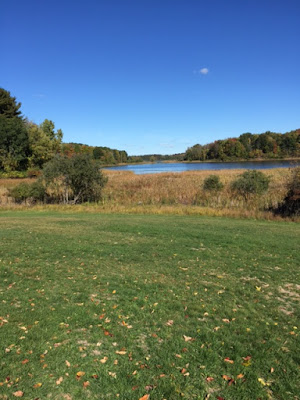 My friend, Nancy, and I decided to spend a few hours taking in
the beauty of Mendon Ponds Park this afternoon.  Mendon Ponds Park, often called the "Jewel of Monroe County Parks" is a great place to get away from
the rat race, whether you choose to hike the trails, paddle a canoe, cross country ski, or, in our case, we just sat and enjoyed the view today.

The fall colors aren't as brilliant this year as usual.  Some say it is because of the very hot summer with little rain.
Posted by Sherry at 10:01 PM No comments: 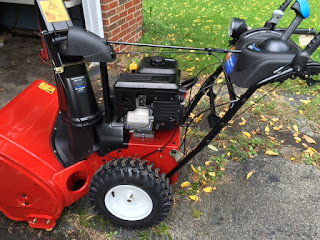 Ouch!  I was expecting a call from the shop to let me know the cost to tune up my 30 year old snowblower.  It was an Ariens and I had been told over the years, "they last forever."

That's not what I got!  "Quite honestly, Sherry, with the needed repairs, above the normal tune up, it is going to cost $500 for parts and labor for your snowblower and that is more than it is worth."

My choices were less than desirable. There have been numerous problems with people contracting with truck plows.  In fact, just in the last year, a contractor is now in jail for collecting money at the beginning of the season to plow driveways and then "forgetting" to plow them.  The plows often don't show up in time in the morning for you to get out.  Given that my driveway is long (my house sits back off the road), shoveling is not an option.

The shop I sent it to, actually, where it was bought back in the mid 80's, is reputable so I knew they weren't handing me a line.

There were a couple of 2015 models with a reduced price.  He wanted me to handle both of them "to see if you can operate them."

WHAT???  Sometimes I can keep my mouth shut when offended.  This was one of those times!  I've been operating that old model Ariens for decades and you question whether I can deal with a new one???

Uhhmmm, actually the Ariens model was a bit heavy, BUT I COULD STILL OPERATE IT!!!  The Toro was lighter.

I am from the old school that Ariens is the best brand.  Not so anymore.  The shop has been carrying Toro blowers since the 90's and other than routine maintenance on them, they have had no problems or customer complaints.

The new one has a lot of improvements in the operating of it.  There are levers to make it turn automatically, left or right.  The intake area, that carries the snow up into the chute, is bigger and that function is guaranteed for life.  All you need is a deep, heavy snow to clog the chute and ruin your day!

Then I noticed there are 6 forward gears.  "Don't even think of using 5 or 6!" I was instructed.

It was delivered with oil and a full tank of gas.  Hopefully, in the coming weeks (or months?) when we get our first snowfall, it will do its job!