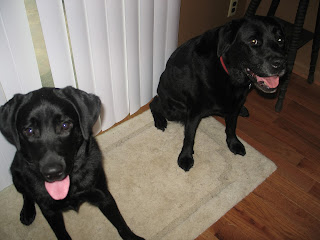 Here are two pictures of "my children." 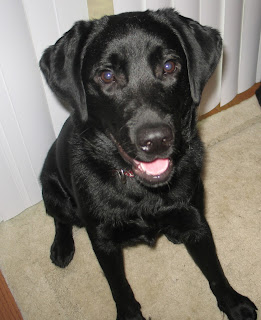 I really tried to get them closer together in the first one!  Morgan is 11 months old and Molly will be 12 years old in September.

Morgan is taking obedience training at Tails of Success in Irondequoit - a suburb of Rochester.  For those of you in this area looking for a good quality training center, I recommend them.

Your smile for the day 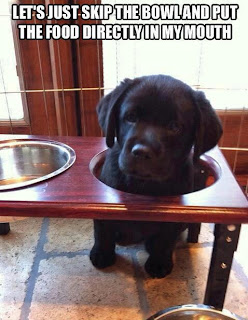 when you are just a 10 month old Lab puppy torn between your training and temptation.

This morning I was eating my breakfast on the couch watching TV.  Morgan, my Lab puppy, jumped on the couch next to me.

My plate of food looked sooooo good to her, never mind that she had already been fed.

She was standing in the most ridiculous position, kind of like a "ready to strike" position, her eyes fixed on my plate.  For a minute, I stared at her to see what she would do.  A stone statue could not have been more immovable.

I calmly said, "No, Morgan."  She didn't move or acknowledge my command.

Now this was beginning to get too funny and I was trying hard not to laugh.

Finally, I said, "Morgan, SIT."  She did.  Only she looked at me with those big dark eyes that clearly said, "Okay, I've been good long enough.  Can I please have that last bite of toast?"

You don't know what you are missing if you don't have a Lab in your life!
Posted by Sherry at 8:55 AM 1 comment:

No matter what side of the gun issue you are on, I think any reasonable person would shake their head in disgust at some of the outrageous decisions by school officials recently and their zero tolerance policies towards guns.  For example, a 5 year old child is suspended for chewing a cookie into the shape of a gun.  A high school student, who had gone shooting the day before, arrived at school and realized he had forgotten to remove the cased gun from his trunk.  He called his mother to come and take the gun home.  He was caught by authorities and severely punished.  The list goes on and on and gets more disgraceful.

We have come a long way since the day after Christmas vacation when I was a first grader and proudly wore my cowgirl outfit, complete with a cowgirl hat, belt and holster with a real live cap gun and was the envy of a lot of the kids that day.

According to a Fox News website story, psychologists are now saying these gross acts of zero tolerance on the part of school officials could backfire on children.  AMEN!

I don't make a secret that I am a very strong believer in Second Amendment rights.  I believe if you are of sound mind and do not have a criminal background, you should be able to own a gun and purchase that gun without unreasonable red tape.  What do I do with my guns?  Some in my collection are for self defense and concealed carry.  One is for sporting clays shooting.  Others are for target shooting.  Being a history buff, I love my two 1911 pistols.  They were designed in the year 1911 and were used by the military until just a few years ago.

I am highly trained in defensive pistol, home invasion protection, and overall gun safety.  I don't believe that buying a gun and toting it around on your hip makes you safe if you have not taken proper training.  I know the laws of the state where I live regarding firearms backwards and forwards.  I know when I can shoot in self defense and when I can't.

I stumbled across a recipe for homemade weed killer that really works.  And it is much cheaper than the Roundup that I have always used.

In a big bucket, I combined a gallon of vinegar, 2 cups of epson salts, and 1/4 cup of liquid dish detergent.  Stir it up and put it into a spray bottle and go after those pesky weeds!

I'm told it will kill anything so I was careful not to spray it where I didn't want to kill grass or plants.
Posted by Sherry at 4:05 PM 1 comment: 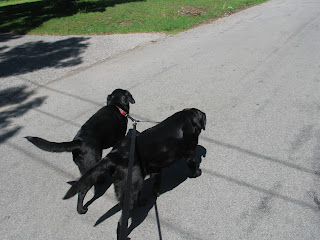 Yesterday I got a coupler for the retractable leash so that I can connect two dogs. Yesterday's walk was cause for a good laugh for any neighbor who happened to look outside.  Morgan, my soon-to-be-one-year-old Lab, wanted to go much faster than Molly, who will be 12 in September.

Today's walk went much smoother.  Morgan is getting the idea! 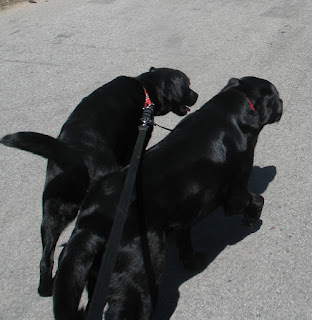