I want to wish all my blog friends a very happy and prosperous 2013.  Almost four years ago, I got into this blogging thing.  I had no real expectations.  I knew if I got tired of it, or ran out of reasonable content, I could always give it up.

What I never imagined in February 2009 was how much blogging would enrich my life and the friends I would make and the things I would learn.  Some of you, even though I have never met you in person, I feel like I've known you forever. . . a long time friend.

Thank you, friends, for all the enjoyment you have given me and for allowing me a glimpse into your life.

Bring on 2013 and all its challenges, surprises, and new adventures!
Posted by Sherry at 8:51 PM No comments:

I knew this one was going to be great just by licking the mixing bowl for the sauce after I emptied it into the crockpot over a pile of baby back ribs!

Everyone knows I am big fan of crockpot cooking.  The lady that comes over and lets my puppy out mid-day e-mailed me one day after she had been in my house asking what I had in the crockpot because my house smelled so good!

Try this one - you won't be disappointed.

Believe it or not, I had all the ingredients the day I decided to try this recipe - even the Chinese 5-spice powder!  I had bought it not too long ago for another recipe.

Not sure where I found this recipe.  I am famous for finding recipes on the internet, scribbling them on a piece of note paper - as this recipe was - sticking it on my fridge till I try it and decide if I want to make it again.  This one is definitely a keeper!
Posted by Sherry at 8:10 AM 1 comment:

Rochester has had a very mild winter so far.  But that is changing by the minute.  The forecast is for up to a foot or more of snow by daylight tomorrow.  From looking at the radar maps, I have to believe the forecast.  By rush hour tomorrow morning, the prediction is for slippery roads and near zero visibility with blowing and drifting snow.

I will make an honest attempt to get to work tomorrow, but I'm not crazy!

I believe in the NRA 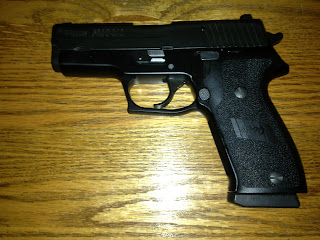 There are radicals on either side of the gun control issue.  I am a member and a strong supporter of the National Rifle Association.  Here’s why I believe what I do.

The NRA supports responsible gun ownership and firearm education.  I have taken at least three classes developed and sponsored by the NRA:  Basic Pistol, Personal Protection Inside the Home, and Personal Protection Outside the Home.  I have taken many more classes through a very reputable company here in Rochester, all taught by NRA sanctioned instructors. . . Defensive Pistol I and II, Home Invasion Defense to name just a few.  That Home Invasion Defense class lasted two whole days and left me bruised and physically tired for over a week.  But I wouldn’t trade all the skills I learned in that class for anything.

If you own a handgun, you owe it to yourself to take Basic Pistol.

The NRA does not support pulling out a gun and shooting at every bump in the road.  Instead, they teach awareness and prevention.  Just one example, use common sense.  Don’t go to an area you know is unsafe.  If you wouldn’t go there without a gun, then don’t go there with a gun.  If you find yourself in an uncomfortable situation, walk away before it escalates.

Everyone who carries a concealed weapon for personal protection hopes the only time they will ever pull the trigger on that gun is at the shooting range.  I’m one of those.  But if I find myself in a situation where the only way out is to defend myself with deadly force, then I am ready.  I am ready because of hours and hours spent in class and even more hours in practice.  If you are going to carry a firearm for personal protection, you better be able to make many decisions in a split second.
A bad guy is coming at me.  The only defense I have in this situation is to draw my gun and fire at him.  BUT, before I pull that trigger, I need to ask myself – Are there innocent people in the line of fire?  A bullet can travel a great distance even after going through several barriers (walls, humans,etc.)

Can I reasonably avoid this situation by running?  Are there people nearby that could help me?

Do the laws of the state I live in allow me to shoot this bad guy given this set of circumstances?

And those questions are only the tip of the iceberg, folks.

Without looking in my gun file, I probably could not name every firearm class I have taken – there are that many.  Every time I take another class, I find lots more things that I didn’t already know.

As for the numerous idiots on TV (mostly liberal Democrats who have little or no knowledge on intelligent gun ownership) who criticized the NRA this week for calling for a qualified armed guard in every school in America, I have absolutely no respect for their short sightedness.  None.  Zero.  Show me just ONE instance, just ONE! where a mass murderer could not have been stopped by a  qualified marksman. . . and if you carry a gun for personal protection, you better be qualified!

I have no desire to own an AR-15.  But that doesn’t mean that a responsible person who enjoys shooting this weapon at the range should be denied that right.

I hope I have helped shed light on the subject of gun control here.  Sure, it’s a hot button issue.  But let’s use common sense, people.  If you believe the answer is to take away all guns, then let’s also take away all cars.  Then we will have no more deaths caused by drunk drivers.
Posted by Sherry at 6:38 AM 1 comment:

Born in August, Morgan had never seen snow before.  She loves running and playing in it. 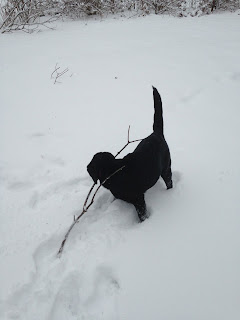 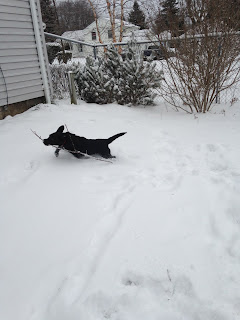 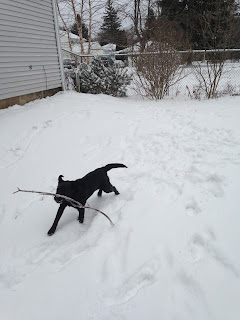 Conversations at the hair salon

I was 20 minutes early for my hair appointment this morning.  There were no magazines available that I cared to look at so my mind just kind of wandered to nothing in particular.

There were two small girls playing quietly on the floor waiting for their mom.  There was an older girl in the waiting area with her mom and another in the chair not far from where I was sitting.  I quickly picked up on the fact that these two girls were about the same age and they looked very much alike.  "Are they twins?" I asked their mom.  Now that used to be a question I really did not like to get many years ago.  When I had my twin sons in a stroller, often dressed alike, and definitely they looked alike and were the same size, I would get annoyed when people constantly asked, "Are they twins?"

This woman and I began a vibrant, often comical conversation!  She pointed to the two smaller girls playing on the floor.  They were twins too, although not hers. We shared twin stories.  Then she asked me if my sons had gone to college.  I said they both did.  Her daughters were seniors in high school and they were still trying to decide if they should go to the same college or to different ones.  We discussed the pros and cons of both sides of that issue!  My boys went to different colleges in different states.  My one fear for four years was that their graduation day would be on the same day.  Turns out they graduated a week apart so I could go to both graduations.

We agreed that the first two years with twins, your whole life is nothing but taking care of them.  I would have been bored with one baby to care for!  As they get older, they tend to be involved in the same activities so you aren't running in different directions at once!

I was enjoying this conversation so much that when my hair dresser called for me, I told her she was interrupting us!

Everyone knows I love football, especially if the Alabama Crimson Tide is involved.  Their game against Georgia last night for the SEC Championship was football at its best.  Admittedly, Alabama's defense didn't play their best.  But one thing you can depend on.  When the chips are down, the Crimson Tide digs in hard. 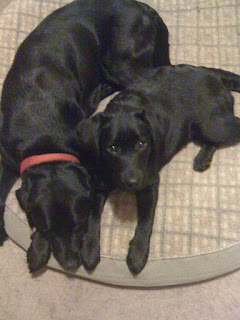 Molly and Morgan in one of their quiet moments!