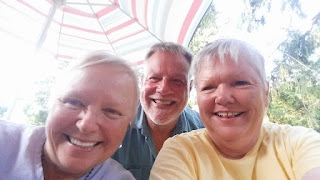 Had a very enjoyable evening with friends, Nancy and Robert Lauterbach - we go back a long way!  Robert smoked a chicken and Nancy had wonderful vegetables and potatoes.  Thanks, guys.  I truly had a wonderful time.

Posted by Sherry at 9:36 PM No comments: 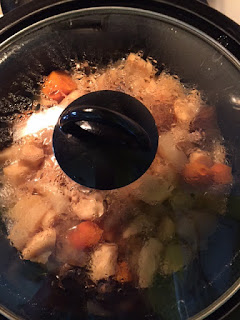 I have a cookbook, Easy Vegetarian Slow Cooker, that has a lot of very good recipes.  I'm trying a new one today.  It is a root vegetable stew and from the list of ingredients and spices, I just had to try it.  The house is filled with a wonderful aroma and I'm anxious to taste it.  The vegetables include onions, parsnips, carrots, beets, turnips, potatoes, and carrots.

Right now I'm off to pick up my meat order from my farmer. 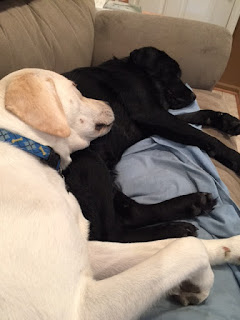 Sometimes things settle down around here and my two
super active darlings need a time out.

Posted by Sherry at 3:31 PM No comments:

The war on dog hair

Having two dogs in the house, it is a constant battle to keep dog hair at a minimum.  My worst complaint is on my clothes.  I have a polar fleece robe that attracts and holds dog hair like a magnet.  And with dogs that love to cuddle and one especially that thinks its fun to walk all over me when I'm sitting on the couch, that robe always has dog hair all over it.

Even when I run it through the washer and dryer, it still comes out with a lot of clinging dog hair.

I found an article on attacking dog hair.  At first, I didn't give it much interest.  You know how the internet is full of how-to advice, much of which is worthless. . . like the time I found a homemade version of dishwasher detergent. . . I was thrilled at the thought of the money I'd save by making my own detergent.  Until the day I took a glass out of my cabinet and found dried on milk in the bottom of it!  Then I took another glass out and it too was "cloudy."

I decided to try this new idea for combatting clinging dog hair on my robe.  IT WORKED!!!

First, place the robe in the dryer for 10 minutes on air only.  Take it out of the dryer, shake it, and then place it in your washer and wash as usual.

At the end of the wash cycle, place in the dryer.  MAGIC!  The dog hair was gone!

The other hints given included using a swiffer cloth to clean hardwood floors, rather than vacuuming.  I already do that and it does work great.  I also keep an old sheet or an old tablecloth on my couch.  Not only does it help with hair, but when I see how dirty they get when I wash them, I'm glad the dirt got on the sheet rather than my couch!  When company comes, you can put away the couch cover.

It's a Southern thing, ya'll

Living in the North, a lot of the things I took for granted growing up, have gone by the wayside in my mind.  But occasionally something will strike a chord that takes me back to my Southern roots. . . like tonight on Facebook, someone posted a photo of a banana something or other thing.  It looked like a cross between banana pudding (a Southern institution) and banana cake.

My thoughts turned back to my childhood in the South and Southern things!  Like boiled peanuts (they really are delicious), grits (now DON'T say they are like Cream of Wheat!), hush puppies and fried fish.  And pecan pralines (it is Pah-cahn, NOT pee-can).

And Divinity. . . that is the sweetest candy you will ever eat.  Black-eyed peas and corn bread.

Then there is sweet iced tea that Southerners drink year round.

I rarely eat seafood up here.  When you grow up on the Gulf of Mexico and eat fish that slept in the Gulf last night, well, you just can't tolerate fish that has been trucked in.  You really can't beat the taste of fresh fish.  Or walking along the shore early in the morning at sunrise and catching crabs as they wash in with the waves!  Crabs are delicious to eat, although a pain to separate the shell from the meat.

And the other Southern tradition that I miss up here. . . the Blue Angels, stationed at Pensacola Naval Air Station (my hometown, Pensacola).  Imagine moving to Rochester many years ago and being told I had to pay to see the Blue Angels or the Air Force Thunderbirds perform!  No! No!  In Pensacola, you grow up watching them fly over your yard in practice sessions.  And to see their complete show, just drive over to Pensacola Beach and watch them for free.

I can count on one hand the number of times I hear someone here say, "Well, bless your heart,"  or "ya'll come, you he-uh?"

And while many people in the North are very friendly, the kind of people that never meet a stranger, you just can't beat that genuine Southern hospitality!
Posted by Sherry at 8:59 PM 1 comment:

Brisket in the smoker with my family 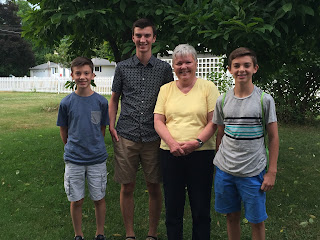 Me and my grandsons, Andrew, Kevin, me and Jake. 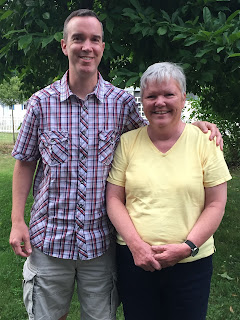 Me and my little boy, John!

John and Jen and the boys and John's twin, Michael, were over today.  I smoked a brisket in the smoker and it was a hit!  John and Michael always ask for my potato salad and three bean salad.

Michael had already left when these pictures were taken.

Kevin just returned from two weeks at Philmont Scout Ranch in New Mexico.  He had a great time.