Getting ready for lots of smoking!

Every three day summer holiday Lowe's marks down their Kingsford charcoal and wood chips and chunks for smoking.  And they were kind enough to put the charcoal packs (40 lbs) in my cart and in my car.  They were all out of wood chunks so I stopped by Home Depot to get those.

I've never smoked with the chunks before.  They should last for an entire smoking without having to replenish like I do with the chips.

I had big plans to smoke baby back ribs this weekend but it looks like it is going to rain most of the time.  YUCK!  I wonder what it's like to stand over the smoker with an umbrella for several hours???
Posted by Sherry at 1:54 PM 1 comment: 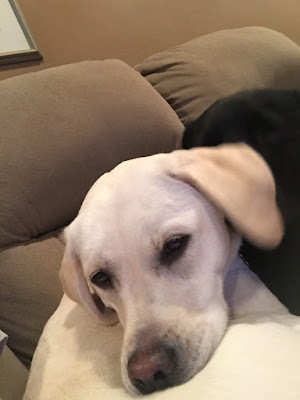 It's tough keeping things stirred up around here but I work at it.

Bailey will soon be two years old.  Although she has calmed down quite a bit from the rambunctious puppy stage, she still has her moments!

Posted by Sherry at 6:49 PM No comments:

My kitchen smells wonderful right now.  I'm making a "first of the season" batch of bbq sauce.  I've tried dozens of recipes over the years and this one is my favorite.  I use it on chicken and baby back ribs on the grill and sometimes on left over roast beef.

It is taken from "Smoking Meat" by Jeff Phillips.

Combine all ingredients in a saucepan.  Use a whisk to thoroughly combine.

Cover and bring to a boil, then simmer for about an hour.

I store it in the refrigerator in a glass jar with a lid.

Posted by Sherry at 5:43 PM No comments:

Life is funny sometimes.  I was mowing my lawn one night this week with my 20 year old Toro lawn mower.  It has served me well.  Other than routine tune ups, I have never had to spend money on it.

Less than half way through mowing the lawn, oil starting flying everywhere!  Never had that happen before.  For a few seconds, I was kind of in a daze with what happened.  Then I recovered enough to turn it off.

I didn't want to spend money on a 20 year old mower and the shop owner agreed.  So I bought a mid-range mower, another Toro.

Now what to do with the dead one?  I put a post on our neighborhood facebook page stating that I would be putting it out by the road and it was free for the taking.  In less than an hour, it was gone!

An older gentleman loaded it into the back of his pick up truck and then came to my door.  He asked about it and I explained that as far as I knew, the motor was still fine and that it had spouted oil when I was using it.  He knows someone that likes to tinker with old things.  Maybe he can breathe new life back into it.  If nothing else, he can retrieve the gas from the half filled tank!

Around here, if you want to get rid of something quickly, put it out by the road.  A few years back, I had an old rickety step ladder.  It was left behind when I moved into this house 20 years ago.  The last time I used it, it was the same as standing in a rocking chair.  I put it out by the road and it disappeared!  Now why would anyone want a totally unsafe step ladder???
Posted by Sherry at 12:24 PM No comments:

The decline of Sears

It's not the first retail giant to go into steep decline.  But this one kind of rattled me, you could say.

The famous Sears Roebuck Catalog that most older Americans grew up with, began back in the 1800's.  In rural areas, the General Stores of the day could not stock the variety of merchandise that the Catalog brought to your doorstep.  If you had asked me back in my childhood, I would've told you Sears Roebuck would be around until the end of the world.

The news is reporting Sears is all but shutting down.  In a downward spiral over the last couple of decades, a string of upper level managers have made poor business decisions, unable to bring the retailer back into the glory days it once knew.

My first job was working in the Sears store in downtown Pensacola, Florida the summer after my sophomore year in college.  I have often said that I learned more that summer working at Sears than anyone could ever learn in a Psychology 101 class.  I learned to smile and be courteous to customers no matter how tired I was from standing on my feet all day or no matter how rude they were to me.  I learned when there was down time from waiting on customers, I needed to find something to do to keep busy, such as straightening merchandise on shelves.  I was awe struck by the number of people who would shoplift right in front of you and then deny it.  That was the summer I learned to "read" people!  You know, this woman is likely to cause trouble, but that one is not!  This one is trying to distract me and that one is not.  Same went for fellow employees.  If you were waiting on a customer that involved a commission sale, an older employee knew how to push you aside and take over your customer.

As a temporary summer employee, I was bounced around from one department to another.  After I had been there a few weeks, I found that two particular departments, Jewelry and Boys Clothing really liked me and vied for my time.  That was an ego boost, for sure.

It wasn't just poor management that has brought Sears down.  Times have changed.  Most of us today shop primarily on the internet - myself included!  It has become popular to shop online with easy return policies and expert customer service.  So why bother to drive to a store, many times paying to park your car, when you can sit in the comfort of your home and shop and compare with your computer?

Who knows for sure?  Maybe by a stroke of genius, someone in the hierarchy of Sears will manage to turn things around. . . I doubt it.
Posted by Sherry at 9:57 AM 1 comment: