Morgan and Bailey in the backyard

It's a warm day here in New York.  A fun time in the backyard for two Labs!  Bailey, at 8 months, is as big as Morgan!  Look out, Morgan, she hasn't stopped growing yet.

Today is my long time friend, Jackie's birthday! I won't say how old. . . but she's four months older than me!  We go back a long way, to third grade at Myrtle Grove Elementary School.  This morning, I wished her Happy Birthday on facebook.  Here is her reply (some of these I had forgotten!)


"I think that was Mrs. Burchfield's class, right?  Remember the field trip to Wakulla Springs?  You loved the outdoors way back then.  I remember you bought a bird book.  LOL!  And our Girl Scout outing where we dug a trench and fixed our lunch in aluminum foil packs and put it over the fire?  And going home from school for lunch and having hamburgers that your mother made with a press.  That always amazed me!  And Mr. Howles' class, 4th grade.  You were the teachers pet.  He let you write on the blackboard every day.  You always had the best handwriting.  And spending the  night.  We sat in bed and played with those crazy magnetic pads where you put hair and a mustache on the bald man and then flipped it up to erase it.  And Whitmire Cemetery and the ghouls.  We were scared.  We always had such fun!  It's great to have old friends that remember your childhood!  Thanks for the birthday wishes!  Wish you were here.  We could go and get in trouble.  Ha Ha!"


The Whitmire Cemetery story, unfortunately, is real and creepy.  I had never heard the term "ghoul" before at that stage in my life.  It means someone that digs up graves.  (I told you it was creepy.)  The man dug up multiple graves before his wife turned him in to police.  Yes, he was a mental health case.  She noticed that every time a new grave was disturbed, her husband came home late at night and he was dirty.


I had forgotten the trip to Wakulla Springs.  I wonder if that is still open?  It is in Florida, near Tallahassee.  We rode glass bottom boats that let you see what was under the water. . . all kinds of fish and marine life.


Yes, I loved the outdoors back then.  There are few things I love better than getting out in the woods, a long way from civilization and noise of the everyday world, either on foot, in a canoe or kayak, or on a bike!
Posted by Sherry at 9:07 AM No comments:

Being raised in the South, I grew up eating cornbread for most evening meals.  In fact, my dad didn't think a meal was complete without cornbread.

I have a recipe that I've used for years, for meals and for cooking a turkey at Thanksgiving and Christmas.  To my way of thinking, it was the perfect cornbread recipe.

Until now.  I found a new recipe online and as much as I don't like to admit it. . . this one is far better than my tried and true recipe!

It has been updated to include whole kernels of corn and uses other ingredients to make it healthier.

Try it and let me know what you think.

Place the oven rack in the center of the oven and preheat to 350 degrees.

Lightly grease a 9 x 5" loaf pan.  (I have to be honest, my old school ways require the use of a cast iron skillet!  Long time Southern cooks will tell you, corn bread just isn't corn bread unless it is baked in cast iron!)

Combine in a large bowl, the flours, cornmeal, baking powder, and salt.  In another bowl, beat together the eggs, buttermilk, honey and oil.  Add the wet ingredients to the dry ingredients.  Stir in the corn.

Pour the batter into the prepared pan.  Bake until the top is golden brown, about 45 minutes. You need to adjust the baking time if using a cast iron skillet.   Let the bread cool in the pan for 15 minutes.  Now remove the bread from the pan and let cool on a rack until it is completely cool.

Mmmm, this is so good! 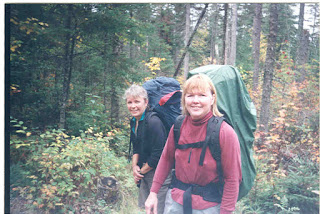 Nancy and I go back a long way!  Like 40+ years!  The picture above was taken of the two of us (that's her on the left) back in the early 90's on a trail in the Adirondacks of New York State on a weekend backpacking trip.

We watched each other's children grow up and have children of their own.  We have backpacked, paddled, day hiked all over New York State together over the years.  I could write a book on all the fun times we've had together.

We were on a week long backpacking trip many years ago.  Nancy brought along a 2 pound link of German sausage for part of our food supply.  I really didn't care for it and it was a heavy load to carry. . . when you are backpacking, ounces count!!!  For a couple of days, we took turns carrying it in our pack.  One day on the trail, we met an older couple who were on a three week backpacking trip of the Northville-Lake Placid trail.  As soon as this couple spoke, it was obvious they were German!

Nancy and I looked at each other in amazement!  Nancy said to them, "We have this heavy link of German sausage which we aren't going to eat.  Would you like it?"

The look on their face spoke volumes!  They were thrilled.  As long distance hikers, their diet consisted of rice cakes and freeze dried food. . . all lightweight rations!  They were glad to take the sausage and we were really glad to be free of the weight!!!

One year, we spent several days in the Lake Placid area of of the Adirondacks in the middle of January, when it is freezing cold and plenty of snow on the ground.  We decided to climb Cascade (one of the High Peaks) on snowshoes.  The conditions were more appropriate for ice "claws" on your feet than snowshoes.  But we headed up anyway.

Near the top we came to a wide area with about a 45 degree incline that was a sheet of ice.  We were so close to the top that I was not about to turn back.  "Come on, Nancy, we can do this!"

I won't repeat her litany of words at that point, but let's just say she wasn't too happy with me!  "Oh, hell, Nancy.  If we slip, we are only going to fall into that heavy mass of evergreens at the bottom. . . that may even be fun."

Repeating a string of, let's say, not too polite words aimed at me, she slowly crawled to the top, while I was behind another evergreen at the top rolling in the snow trying not to let her hear me laughing at her.

The view from the summit was beautiful that day, well worth the effort to get there.

"Okay, (expletive deleted) so how are we going to get down that one section?" She still was angry with me!

"I don't know, we'll make it up as we go along, " I answered, avoiding her dagger eyes aimed at me!

As luck would have it, a young man came along with ice climbing gear.  "Oh!  that is the fun part," he replied when we told him we didn't know how to get down that sheet of ice.  Obviously, this young man had much more experience with these things than we did.

He pulled out an ice climbing tool from his pack, sat down, held the point of the tool into the ice and slowly slid down, quickly climbed back up (I told you he was more experienced and prepared than we were!) and did it again.  Nancy and I couldn't wait to try this.

Needless to say, we truly enjoyed that day. . . and I promise, I never said to Nancy, "I told you so!"

Posted by Sherry at 9:42 AM No comments:

Can you guess this mystery person?

Last week I posted the first mystery person, a new feature of my blog.  I made it too easy and Rita guessed it correctly right away!

This time I'll try to make it a little more challenging!  This person is a close friend or a relative who has been a significant part of my life.  The first person to correctly guess the name wins their choice of a bottle of wine or a chocolate bar!

Here are the clues:

Rita is the winner!

My cousin, Rita, correctly identified our Aunt Ilene as the mystery person in my last post! 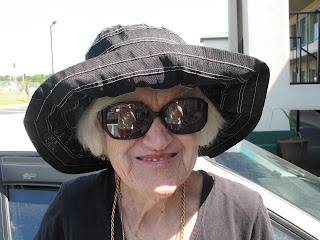 Stay tuned for the next mystery person. . . I'll make the next one a little harder to guess!

Posted by Sherry at 1:08 PM No comments:

Gonna try something new for my blog.  In one of my quiet moments I was thinking how blessed I am to have the friends and family that I do.  They come in all shapes, sizes, ages, intellect, and all are unique in their own way.  Some I've known all my life, others for many years, and maybe even a few who have stumbled into my life more recently.

Sooo. . . here's the rules.  I will not name names or give too much identifying information to protect the guilty.  If you are the first to correctly identify the person, you win a prize!  Your choice, a big chocolate bar or bottle of wine.  This is all in fun and if I offend somebody, TOUGH!

Everyone I write about is special to me. Some for standing by me through thick and thin, others for consistently making me laugh, and others who have touched my life in so many ways.

Drum roll, please. . .  The first person to appear on my post is, let's call her Sadie.

Sadie is older than me and I've known her since way back.  She lives in Florida and likes to party.  And oh, can she entertain.  If you want her opinion on something, she is all too happy to tell you.  Even if you don't want her opinion, she'll tell you anyway.  She will always get the last word in.  If you go back through my entire blog - that's all the way back to February 2009 - you will find her picture here and there.  Like her or not, being around her means lots of laughs and good times.

Okay, that should be an easy one for many of my readers.
Posted by Sherry at 11:52 AM 1 comment: