Lentil Stew in the Crock Pot

I don't know where I got this recipe but I've had it for a number of years.  I make it once or twice a year and freeze in individual servings.  It's much like beef stew only with lentils instead of the beef!  It's a good satisfying meal that packs a lot of nutrition.  Lentils have high amounts of protein, calcium, magnesium, potassium, and fiber.  Not to mention the nutrients from the other ingredients.

Combine all ingredients in a crock pot and cook on low for 8 hours.
Posted by Sherry at 7:38 PM No comments:

This time of year, when the weather begins to turn cool, I like to make soups and chowders. . . and I have a lot of recipes for them!  The one I am featuring here is an old recipe that I've made dozens of times.  I'm sure you will like it!

The Dinosaur Bar B Que Cookbook 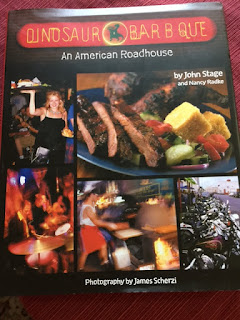 If you are into BBQ, you must have this cookbook!  Really!  The Dinosaur Bar B Que restaurant is a very popular restaurant found in Harlem, Syracuse, and Rochester in New York State.  What?  You live in one of these cities and have never been there?  Shame!

This is one of those cookbooks that is just as much fun to read as it is to find good recipes.

Here is a quote from the introduction:

We hatched the idea for the Dinosaur Bar B Que in 1983 at the Harley Rendezvous, a massive motorcycle gathering near Albany, NY.  They had plenty of everything there except good food.  Hanging with my buddies, and being the hungry men we always were and the good cooks we fancied ourselves to be, we found the pickin's slim.  A few cases of beer later, some rotgut grub in our bellies, and absolutely nothing to lose, we decided to get into the business of feeding bikers.

When we sobered up the next day, it still seemed like a good idea to us. So who cared if we never had any food service experience?

You'll have to read the rest of the story!  It is heartwarming, crazy, and hysterical all rolled into one!

My cousin, Rita, recently asked me to send her my favorite BBQ sauce.  I told her it was impossible to have just one favorite, so I sent her several.  Now I have another one I have to send her!

Throughout its more than 175 pages, are so many fantastic recipes, everything from BBQ meat to sides, soups and leftovers and desserts.

It was difficult to choose just one recipe to showcase here.  But this one, Mutha Sauce, is one I especially liked - and I didn't think I would given some of the ingredients!  Mutha Sauce is fine by itself to slather on chicken, pork, beef.  It is also used as an ingredient in quite a few other recipes in the book.

[Have you figured out yet that I'm really excited about this book???]

So here is the recipe for Mutha Sauce.  I admit I went light on the jalapeno.  I'm not a jalapeno fan, but I didn't want to ruin the recipe

Pour the oil into a large saucepan and set over medium high heat.  Toss the onions, green pepper, and jalapeno and give them a stir.  Season with a pinch of salt and pepper and cook till soft and golden.  Add the garlic and cook for a minute more.  Dump in everything else except the Liquid Smoke.  Bring to a boil, then lower the heat so the sauce simmers.  Simmer for 10 minutes.  Swirl in he Liquid Smoke and let the sauce cool.  Pour it into a container, cover and store in the fridge till ready to use.
Makes 6 to 7 cups.