A fun day with shotguns and pistols

Several weeks back, five of us, all avid gun enthusiasts, spent a fun time shooting sporting clays and then some of us target shooting with pistols and revolvers.  Ralph was visiting Tom for the weekend and he brought his very impressive collection of handguns.  Here are some pictures from that day. 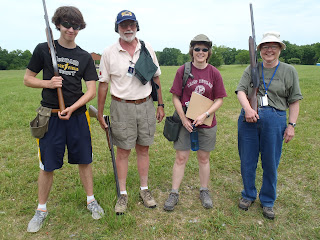 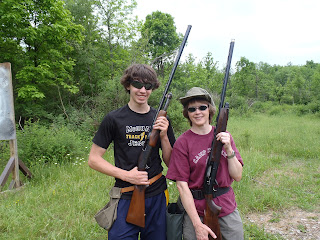 Margaret and her son, Chris 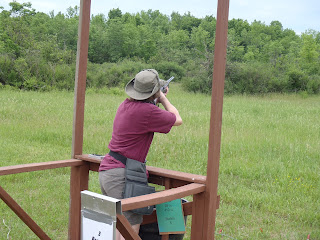 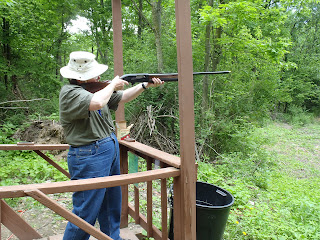 With sporting clays, you move from one station to the next, shooting at moving targets.  The disk can come from any direction, high, low, fast, slow, toward you, away from you. . . yes it's a challenge! 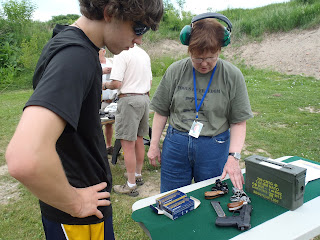 Next we moved over to the shooting bays for target practice.  This is me showing off some of my guns to Chris.  Unfortunately, he could only look. . . and dream! . . . as he isn't old enough yet to get a pistol permit. 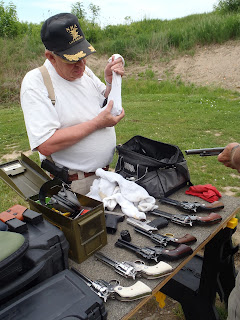 Ralph's pistol permit is a mile long to list all his pistols!  He stores them in socks!!! 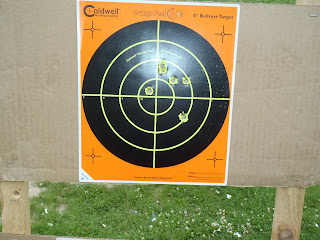 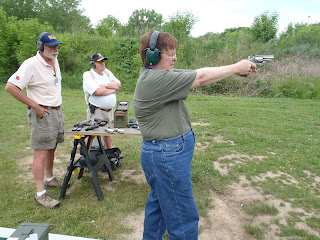 Posted by Sherry at 1:00 PM No comments:

My bed of impatiens under the tree in the front yard is pathetic.  The slugs have taken over.  Each evening, before dark, I put beer in small containers scattered throughout the bed.  Slugs start to come out at dark.  They are attracted to the beer, crawl in the containers and die.

Last year was the first year I had this problem but I managed to have a nice, pretty display of red and white impatiens blooms.  This year?  The jury is still out.

I think next year, I may plant hostas there.  Do you know of a better, more fool proof way of dealing with slugs in your garden?  If so, I'd love to hear from you.
Posted by Sherry at 8:53 AM 2 comments:

How can that be possible?

Several things have happened lately that make me wonder. . . "How can that be possible?"

The TV show Dallas, that back in the 70's and 80's, I planned my life around and never missed a show, has now been revived.  Oh, no way, can J.R. look THAT old.  And Sue Ellen?  And Bobby is gray haired now?  How can that be possible?

And today, Laura Fell, is 90 years old.  She is the mother of my long time friend, Jackie.  We've been friends since the third grade!  And Jackie is 7 months away from being eligible for Medicare!

Now, I'm not going to tell you how close my own twin sons are to their 40th birthday. . . no, I couldn't deal with that.  After all, I'm not old enough to have kids that old!!!  Never mind that my oldest grandson is, ouch!  Is he really going to be 12 in October???

Taking all these things together, stirring them up in my mind, made me realize something special.  Look how far I've come!  I am not the person I was 20, 30, or 40 years ago. . . and I'm glad!  All the things that happen in a lifetime, good, bad, heartbreaking, exhilarating, mundane, trivial, noteworthy or not. . . all these things make you special.  And that is something only time can do!
Posted by Sherry at 9:30 AM 4 comments:

Molly, my Black Lab, has been on her raw meat, bones, and veggie diet for a week now and is doing quite well with it.  I've even noticed that her coat is softer.

This was a long time coming!  I began hearing about this some months back.  At first I assumed it was a fad type thing that would die down.

Even though I read books on the subject and scoured the internet for information, I would never have tried it based on that alone.  No, I needed to know someone personally who was using this diet and be able to see the quality in their dogs.  Lois, over at From Lois' Hands, has two Labrador Retrievers.  Both of these dogs have won numerous awards in Agility competitions.  Obviously, they are quite healthy.

Last Sunday was Day One!  The closer to that day I came, the more anxiety I felt!  I cut up two meaty chicken necks, placed them in Molly's bowl and said, "Here, Lois says this is gonna be good for you."

Now Molly didn't care what Lois thought.  She is a voracious eater and rarely, if ever, turns down anything to eat.  In seconds, she had eaten the chopped up chicken necks and then looked up at me as if to say, "Is this all I get?"

I didn't want to overdo it the first meal.  So that's all she got.  That evening, she got about a fourth of a raw chicken, including bones, a mixture of chopped raw vegetables (broccoli, carrots, and cauliflower), along with a dash of ground alfalfa and kelp.

I'm still learning and in time I'll get smarter about preparing things ahead of time so that at meal time I just plop her food into her bowl and won't have to deal with her "would you just hurry up and feed me instead of standing there playing with my food" looks.

If you are interested, here are two books I found to be very helpful.  Both are quick reads.

Natural Nutrition for Dogs and Cats by Kymythy Schultze with forwards by two veterinarians and Raw Dog Food, make it easy for you and your dog by Carina Beth MacDonald.

I buy my meat from a grass fed meat farmer so I am less concerned about salmonella and other yucky stuff being in the raw meat than if it came from one of the large slaughter houses half way across the country.
Posted by Sherry at 9:47 AM 1 comment:

My friend I wrote about in Monday's post, the one with the rescue dog who had been abused by a man, called me first thing this morning when I arrived at work.  "We are taking him back to the rescue organization tonight."

"I think that is the right decision," I said.

Then she went into a monologue about getting another dog.  "WAIT!"  I said, trying to be diplomatic and understanding.  "Why don't we talk first.  It can't be today, I am swamped with work.  But soon."  She agreed.

This is a family that has only had cats.  No dogs.  Although I found out some information she didn't previously tell me.  Several months back they got another rescue dog and that one went back to the shelter too.

It has become very apparent that this is a woman that wants a "cute" dog, one that is housebroken and can be put on the shelf, out of sight, when it isn't convenient with her schedule to take up time with it.  Children aren't like that.  Neither are dogs.

"I want a dog like yours," she told me.  Well, guess what!  Molly didn't just magically turn into the loving, enjoyable dog she is today.  Yes, a puppy is cute and adorable and who wouldn't love them?  But they require a LOT of time and effort, whether you want to do it or not.

Another issue I have with her. . . she seems set on finding the most wonderful dog at a rescue shelter.  More than one person has told me over the years that I'm a fool for paying big bucks for a purebred dog when I can go to the pound and get the same dog.  Instead, I have been known to spend over a year visiting breeders and asking questions and then choosing a quality breeder.  Price is not my primary consideration. Quality is.  You are going to live with that dog for up to 15 years.  Isn't it worth being careful where you get that dog and knowing its history???
Posted by Sherry at 8:20 PM 2 comments:

A woman at work came into my office today, knowing what a "dog person" I am, to ask my advice.  Her initial comments were, "We got a rescue dog this weekend that was abused. . . ."  That is really all I wanted to hear.

"Sit down!"  I told her.  Another lady came with her.  "I'm going to be honest with you.  I'm going to tell you right up front where I come from as far as dogs are concerned."

"This is like being in the principal's office!" she mocked.

[You don't ask my opinion unless you are ready to hear it!]

I told her I am a very strong advocate of purebred dogs from a QUALITY breeder and not every breeder is a quality breeder.  I happen to think the ONLY dog in the world is a Labrador Retriever.  I can relate dozens and dozens of true horror stories of people getting rescue dogs.  On the other hand, I know of a handful of success stories.

I wasn't happy to learn that she got the dog this weekend and this morning everyone left for work and school and after only two days in the house, this dog was confined to a cage for the day.  The dog is nine months old, a mid-size mixed breed.  She doesn't like men.  My friend has a husband and a teenage son.  The rescue organization told her the dog had been abused by a man.  We don't know how and to what extent.

"I want you to come over to my house and tell me what you think," she said to me.

While the dog at first acted afraid of me, it didn't take long before she discovered I am a friendly person.  She came to my side and allowed me to pet her and talk to her.

"You know, this isn't something that I can tell you what to do," I told them.  "I see positives and negatives here.  This dog is going to require a tremendous amount of patience and effort.  But that would be true if you went to the best breeder in the country and paid hundreds of dollars for a new puppy that was guaranteed for health and temperament."

I asked them questions to try to get them to think about how they really felt.

I was in their home for about a half hour.  Actually, a couple of times, her husband was able to get the dog to come to him and he petted it and spoke softly to it.  Then after a minute or two, she would walk away and hide behind furniture.  It broke my heart.

I drove home with tears in my eyes.  I'd like to get my hands on the man that harmed this animal.  It wouldn't be pretty.
Posted by Sherry at 8:09 PM 2 comments: