A new twist on tuna (or turkey!) salad sandwiches

Here's a recipe I found recently that is heart healthy and good tasting. You can use tuna, turkey, or chicken. Adjust the amounts to suit your individual tastes. A food processor does a fine job of putting this together.

Start with chunks of red onion, avocado, red bell pepper, and celery. Turn on the food processor for a few seconds till this is chopped up nicely.

Next, add chunks of meat and mayo. Process till it is the consistency you like. Spread on whole wheat bread or a wrap. Add salt and pepper to taste.
Posted by Sherry at 2:45 PM 2 comments:

A quiet Friday for me

Although both my daughters-in-law are Black Friday shoppers, not me! Jen was at Target at midnight last night and said it wasn't too bad. Marisa and her mom were going out this morning.

As for me, I'm enjoying making stock from Marisa's turkey carcass from yesterday. I'm doing it in the crock pot. I also have a turkey to roast today! Since I love all my left over turkey recipes, at the last minute, I decided to buy a fresh turkey from the farmer over in Central New York where I buy meat and eggs. They harvested these turkeys on Monday and delivered them to Rochester on Monday night. As I was waiting to get my turkey from them on Monday night, one of the women in the small crowd told me, "Once you have one of their turkeys, you will never be satisfied with any store bought one!" The back of their van was filled with turkeys wrapped in clear plastic! Quite a sight to see!!!

I'm also enjoying 4 mornings of sleeping in without being disturbed by the alarm clock! Wish I could say the same about Molly. When daylight inches above the horizon, she starts slapping me with her paws and licking me until I decide it's easier to get up than to put up with her nonstop attack.
Posted by Sherry at 10:10 AM 3 comments:

To my readers in the US, Happy Thanksgiving!

I think, with all the negativity in the news, it is easy to forget that all of us have so much to be thankful for.
Posted by Sherry at 5:01 PM 3 comments:

A new job at work

There is a cartoon on my refrigerator of Ziggy in his robe in the middle of the night opening his refrigerator only to be met by a mouse eating cheese inside and asking Ziggy, “Couldn’t you at least knock first?”

Ziggy’s feelings at that point pretty much sum up my feelings the last year or more with my work situation. It has been a nightmare. I don’t want to go into detail. Just take my word for it that it was agonizing.

Only a few of my closest friends knew what was going on. Of those who did know, they were worried about me and now that I have come through the storm, they tell me they don’t know how I did it. Neither do I. I am especially grateful for a handful of friends who went all out to help me get through this. These are people who did little things, “Hey, Sherry, can you go for a bike ride on the canal tomorrow?” or “Let’s go for a hike in Black Creek Park.” Or, “Can you come over for dinner this weekend?” Then there were those who called or e-mailed “just to say hi.” When you have friends like this, you can get through any crisis.

My new job is an Administrative Assistant position in the Department of Pediatrics, Division of Neonatology. Four secretaries will report to me.

I had five interviews for this job. The last one was with the four secretaries that will report to me and one other person. Half way through that interview, one of them asked, “Do you mind if I ask what your supervisory style is?”

I told them they were all long term employees in their job and they don’t need me to stand over them, watching every move they make, that I would respect each of them as individuals, that I would never yell at them or belittle them in any way. If there are problems, I would settle them behind closed doors and with dignity and that I would gather all the facts from every perspective before making a decision. Further, I told them I would be judged by how well that office is managed so it is in my best interests to see that they felt good about their job and looked forward to coming to work everyday. I spoke from my heart and I think my sincerity came across to them.

At that point, the woman that asked the question, pounded her fist on the table and screamed, “HIRE HER!”

While I laughed at her reaction, no one will ever know how hard I fought at that moment to hold back tears.

Yes, the last year and a half has been a struggle. . . make that a MAJOR struggle. To borrow a line from one of my all-time favorite movies, Animal House, “when the going gets tough, the tough get going.”

I start this new job in mid-December.
Posted by Sherry at 5:01 PM 1 comment:

A quote from the Bear 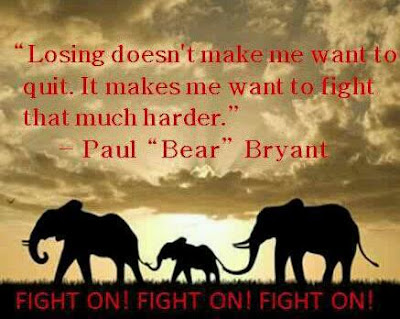 Posted by Sherry at 7:09 AM No comments:

A dog owner speaks out

Last night, in the Town of Greece, a suburb of Rochester, the police shot and killed a a Rottweiler.

Folks, there is no bigger dog lover than Sherry Bennett on the face of the earth. But I fully support what the police did. This dog chased children who were out trick or treating. He lunged at a police officer. Two shots and the dog was dead. Who do I blame? The dog's owner(s).

I have owned dogs for most of my life. Since 1985, I have owned one or more Labrador Retrievers continuously. I have had the gut wrenching experience of standing by two of them as they were humanely put to sleep by a vet. If you choose to own a dog, you have a responsibility 24/7/360 to care for that dog and see that it is properly maintained. That means not letting it run loose. Now don't say, "Well, what if the dog gets out accidentally?" My response to that is, "What if your toddler gets away from you and runs into a busy street?" If you cannot properly maintain and control your dog, THEN DON'T HAVE A DOG. . . it is that simple.

I don't know what legal responsibilities the owner of this dog will face. I am more concerned for those children who may have been traumatized long term by this experience.

I have deep rooted opinions about the type of dog to own. I would never own a breed that is known to be hostile or aggressive. But those are my opinions. If you choose to own any dog, see that it is properly trained and non-agressive. If you do not have the time or desire to do that, then you don't deserve to own a dog.

I know this post is more abrasive than you are accustomed to reading here. But on this case, I think my feelings are justified. I hope the owner of this dog will have the good sense to refrain from ever owning a dog again. . . but that probably won't happen.
Posted by Sherry at 7:38 PM No comments: 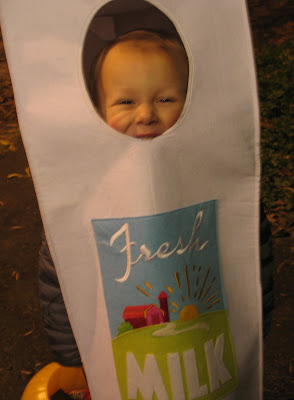 This little guy came to my door last night for Halloween and I just couldn't resist taking his picture!
Posted by Sherry at 5:42 AM 1 comment: