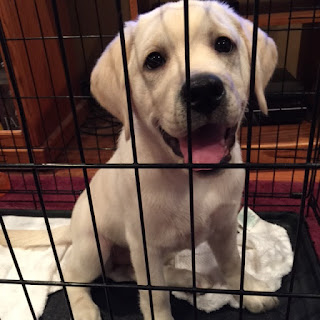 "Morgan started it and I'm the one that got sent to time out." 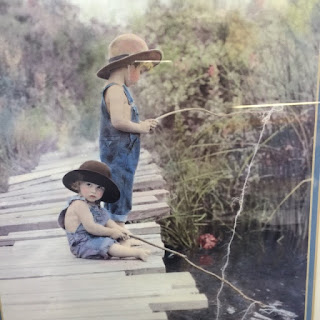 . . . is another's treasure!  Someone threw this picture out at work one day this week.  I walked by and saw it and grabbed it!  Although the picture here doesn't show it, it is beautifully framed and matted with a wooden frame.  ﻿
Posted by Sherry at 10:26 AM 2 comments: 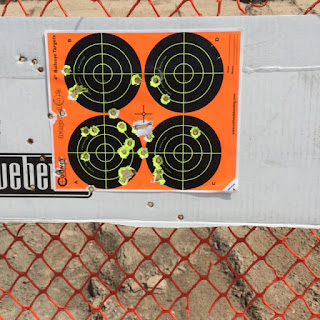 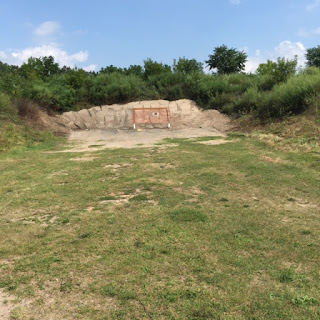 I spent a short time at the shooting range this morning with my Henry Big Boy rifle.  It is fun to shoot.  Even from a distance, I can hit the target!!!

Posted by Sherry at 1:24 PM No comments:

Costco finally opened in June here in Rochester.  I have been a member of BJs for ten years or more.  That membership ends this month.  When I joined Costco, the plan was to decide which one I liked the best, then drop the other membership.

Why?  Everything I had heard about Costco over the years was true.  They really are at the top of the warehouse store mountain.  They carry a more varied and better quality of merchandise and grocery products.  Their sales people are friendly and helpful, as opposed to the scowl I often see on the faces of BJs employees.  They don't carry any GMO grocery products.  Their fresh produce is top quality.  I found that by buying a large package of fresh spinach at Costco, rather than the smaller package at Wegmans, I not only save money, but I find more ways to consume the spinach before it goes bad. . . a healthy alternative.  There are smoothies, omelettes, salads, sautéing it with olive oil. . .

When I go to the check out, they put my purchases on the conveyor belt for me.

Years ago, I did all my grocery shopping at Wegmans.  I still shop there for certain items.  Now I buy my meat and eggs from a grass fed farmer.  And I buy a lot of items at Costco.  So far, BJs and Costco have stayed the same for gas prices.  There seems to be a gas war between the two.  Both are significantly cheaper than other gas stations in my area.

And finally, Costco is closer to my home and easier to get to!
Posted by Sherry at 4:51 PM No comments: 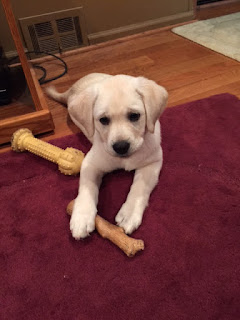 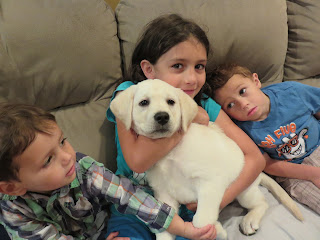 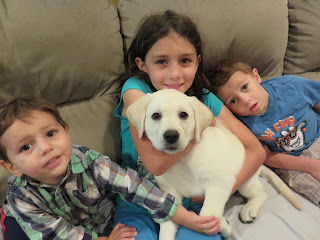 These are three of the four children from across the street. . . the fourth is just a baby and I didn't trust a rambunctious puppy around him!  They came over to see Bailey for the first time.  It's kind of hard to say who was having the most fun here, the kids or Bailey!

Posted by Sherry at 2:52 PM No comments: 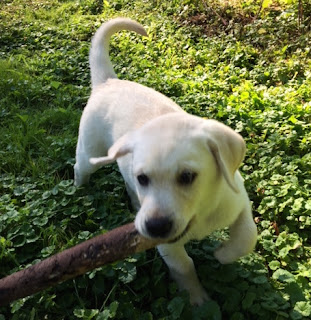 Bailey came home yesterday.  My thanks to the breeders for driving her to Buffalo for me and to my good friend, Nancy, for going with me to bring her home.  On the hour drive back to Rochester, Bailey slept in Nancy's lap most of the way and when she did wake up, she just wanted to be cuddled!

I want to say a word about the breeders, Patty and William Finch of Starlight Buckeye Labs in Ohio.  Not only did they provide me with a quality Lab, but they are just very nice people to deal with.

In the picture above, taken just a few minutes ago, Bailey is dragging around Morgan's favorite stick, which weighs almost as much as she does!!!

Every dog lover has their own favorite breed, but there is just something about Labrador Retrievers that I truly love.  Their personality, their looks, their playfulness, their temperament.  Bailey is my fifth Lab dating back to 1985.
Posted by Sherry at 9:33 AM 1 comment:

Sometimes it's small, seemingly insignificant, things that make the biggest impact on you.  Things that probably you wouldn't give a second thought to.

I haven't made it a secret that I'm bringing home a new puppy soon. . . very soon!

I drove 5 1/2 hours to the outskirts of Cleveland to meet with the breeders.  In my visit with them, it was clear they were the caliber of breeder that I had been told they were.  I gave them a deposit on the puppy and discussed when I would return to bring the puppy home.

While I made an effort to find someone to return with me to bring the puppy home, I ran into a roadblock at every turn.  There is no way I would leave a puppy in a car in the middle of August long enough to go to the restroom at a rest stop.  I found a way around that but I won't be specific!!!

This weekend my phone rang.  There was no name on the caller ID and I don't know anyone from Akron, Ohio, so I almost didn't answer.  But I did!  It was the breeder.  She lives out from Akron and when I realized who I was talking to, I laughed and told her I thought of not answering it!

She said, "We are concerned about you driving that far by yourself with a young puppy."  They offered to drive to Buffalo to deliver the puppy to me.  I quickly told her she had made me an offer I couldn't refuse!  We agreed on a location to meet and she will call me when they are close and I will head out down the NYS Thruway.  Meantime,  a close friend has agreed to ride to Buffalo with me.  She is a cancer survivor and didn't feel she could tolerate a trip to Ohio and back in one day, but Buffalo is well within her limits.

All this was heartwarming to me that the breeder would be that considerate of me.

But what happened next really melted my heart.

I quickly e-mailed a few close friends, telling them I didn't have to drive 10 hours (round trip) to bring the puppy home.  I was elated.

One of them e-mailed me right back stating, "I would feel comfortable if you would give me information on where you are going to meet the breeder, the breeder's name, address, etc.  I don't like you making a transaction of this level at a strange location."

Yes, I laughed at that!  I told her she sounded like me!  I'm not sure she was aware that I had already met these people and knew they were decent people.

She will get the information.  The fact is, whenever I go outside my usual route of "Work/Wegmans/Costco", I always tell someone my flight plane, in case the unthinkable happens.

I am truly blessed to have people that care about my wellbeing.  You know who you are.  THANKS!
Posted by Sherry at 6:05 PM 4 comments: