How many Moms are guilty of this? I am!

How many of these did you say to your kids when they were growing up???﻿ 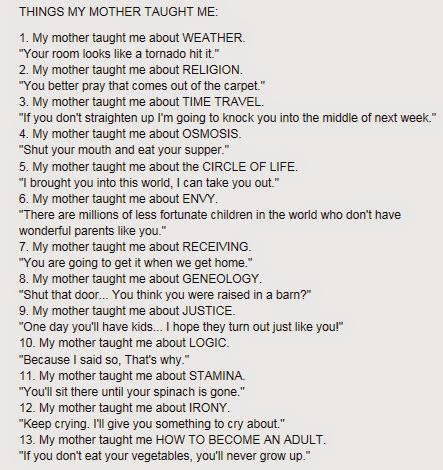 Posted by Sherry at 1:01 PM No comments:

When I became interested in homemade smoothies back in the winter, I carefully scoured the internet for recipes.  As I made each one, I made a note of the ones I liked and the ones I didn't care for.

Then I got adventurous with what I put in the Vitamix.  And THAT'S where the trouble started!  When I found one of my own concoctions that I liked, I would forget to write down what I put in it and of course, the next time I pulled out the Vitamix, I couldn't remember what the last one was made with.

It is true that just about any fruit and/or vegetable you put in a smoothie is tasty and very nutritious, which is why I got into the smoothie craze in the first place.  But everyone has their own likes and dislikes.

I just put together a very good one, which I am drinking as I write this.  Here are the ingredients:

How big is a "scoop", you ask?  Well, I stick a teaspoon into the jar and whatever I come up with is a scoop!

You really don't need to fuss with exact measurements with a smoothie.  And while I do have some that I like better than others, you really can't go wrong with what you throw in the blender.
Posted by Sherry at 2:23 PM No comments:

Where the buffalo roam

I had hoped this would be a lighthearted post that would draw laughter.

When I learned earlier today that a herd of buffalo had escaped from a farm near Albany, New York and crossed the New York State Thruway, all kinds of comical scenes popped into my head!  Imagine driving down the Thruway and thinking you see a herd of buffalo on the major highway that runs across New York.

Just now I have learned all the animals were shot and killed with the blessings of the New York State Police and the owner of the herd.  It was agreed that there are no acceptable cages to corral the animals to return them to the farm.  Obviously, a group of such large animals running loose is a danger.

I am on an avocado kick these days.  It is highly nutritious and if you look around, there are many ways to prepare it that are really good.

My newest discovery is avocado toast.  A quick internet search brought up a lot of different varieties.  It is quick, good for you, and filling.

Here are just a few that I like.  I would love to hear from you on your favorite ways to use avocado.

Another way I eat avocado is sliced on crackers sprinkled with salt.  Goes great with a glass of wine.
Posted by Sherry at 12:24 PM No comments:

A scam I was unaware of

I wasn't going to put this on my blog.  It certainly doesn't fit the tone of my posts.  But if it alerts someone else, then it will be worthwhile.

Recently, I drove to my annual cousins' reunion down South.  The first night I was in a Hampton Inn in Kentucky.  At 3:30 am, my phone rang and woke me from a dead sleep.  A "friendly" male voice on the line apologized for disturbing me.  He explained the hotel computer had crashed and they had lost all their registration information and "I just need some information from you."

"Can't this wait until the morning?" I asked in a not too pleasant voice.

"No, I'm awfully sorry, but we need this information now."  He asked for the credit card information I used to pay for the room.

When I continued to resist, he became more assertive.  I was told if I could not come to the front desk right then, he would send Security to my room to escort me.

THAT is when I hung up!  I would have hung up much sooner had I not been asleep when the phone rang.

The next morning I checked with the front desk.  They told me they would never call my room at such an hour.  But the more disturbing piece of information was when they told me the call had to have come from inside.  It is not possible for someone outside the hotel to call directly to a guest's room.  A guest who overheard me talking to the desk said she had heard of this type of thing.

No real harm was done, other than disturbing my sleep.  If this man's motive was to get me to leave my hotel room at that hour, he failed.

When I travel, I will smile and say hello to anyone who I have eye contact with.  But beyond that, I don't get involved with strangers, no matter how "safe" they may appear.
Posted by Sherry at 11:39 AM 2 comments: 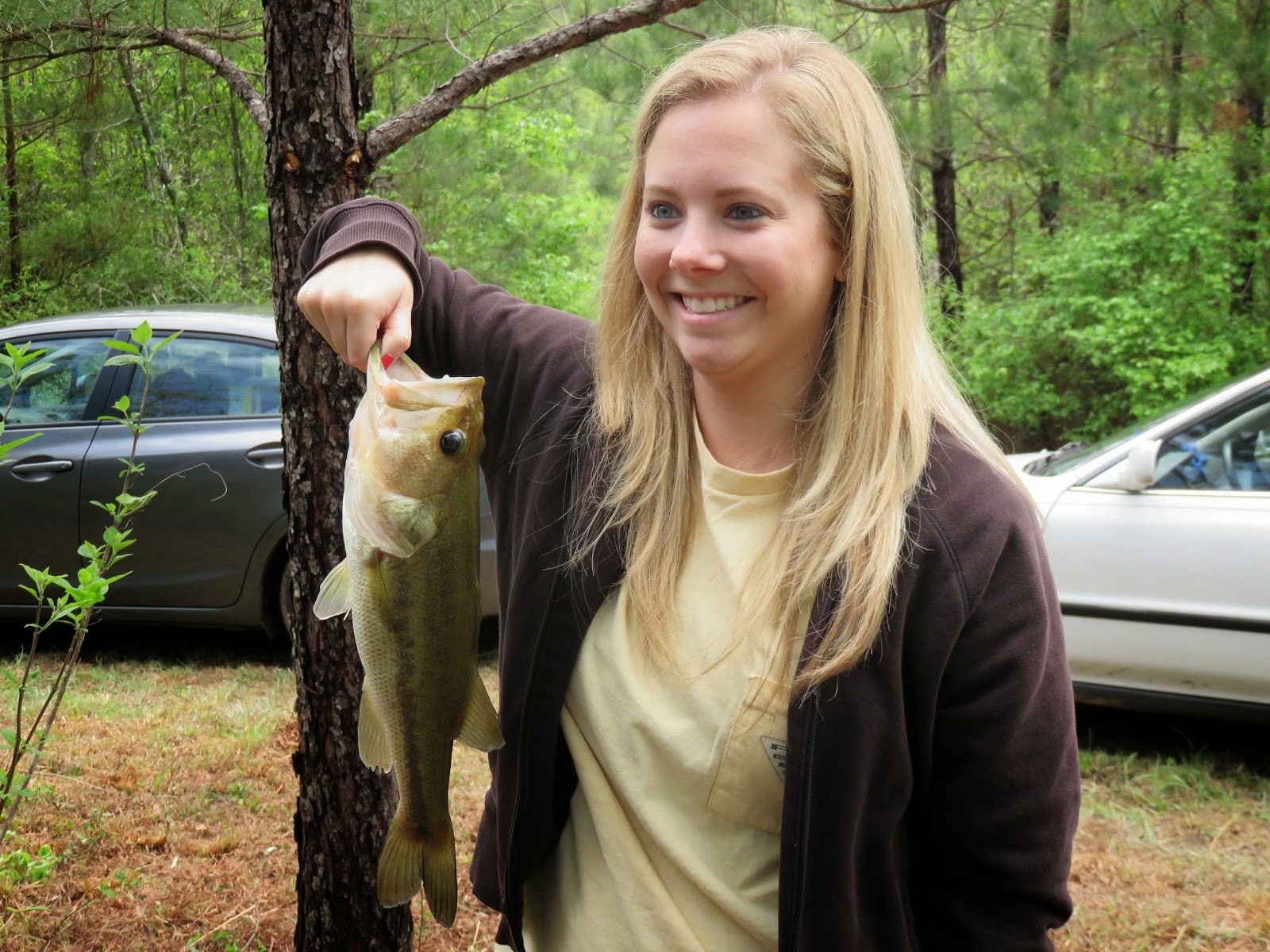 Unbelievable!  Emily threw her line in the water and in seconds, pulled this one in! 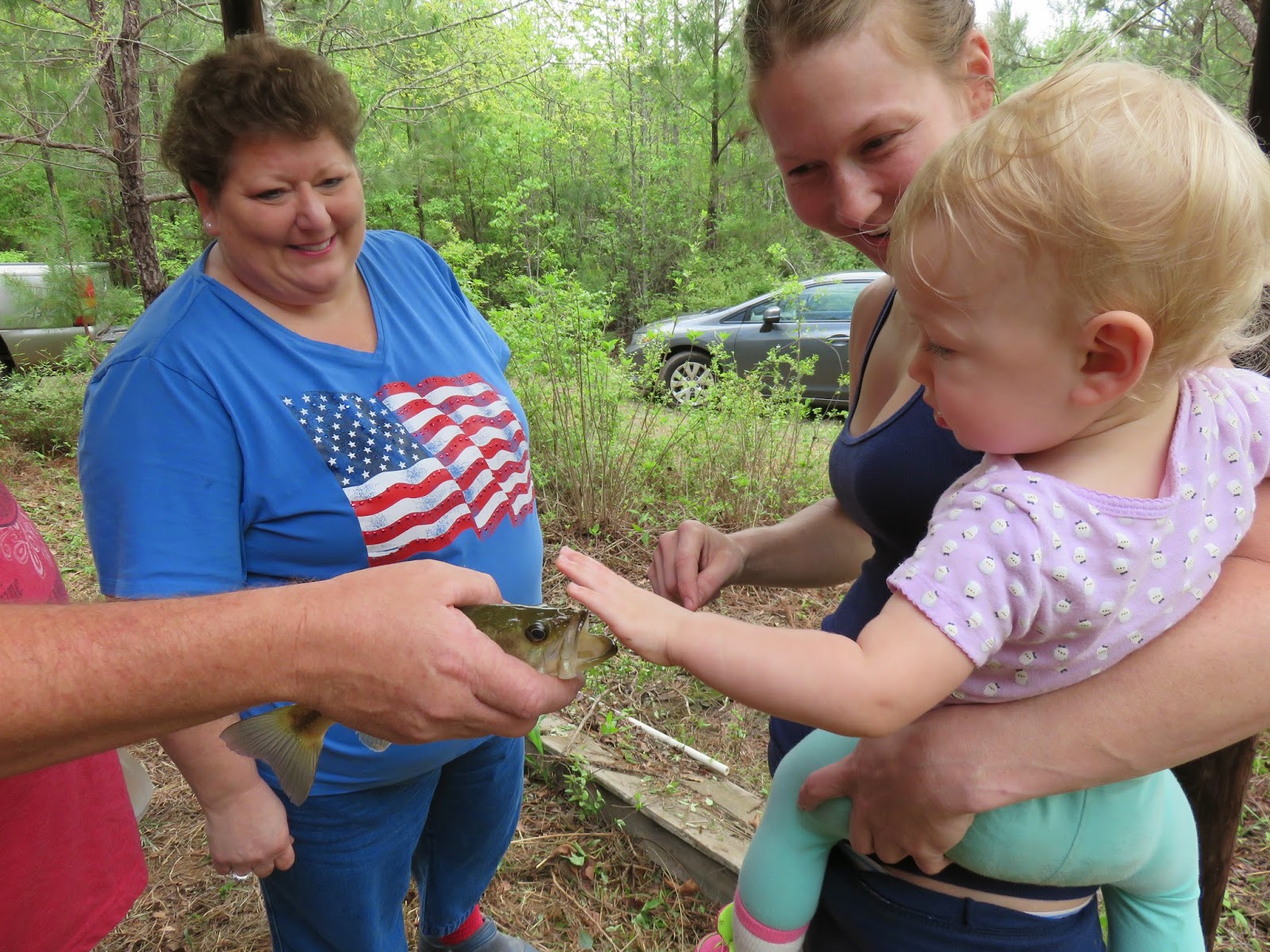 Little Brileigh is not afraid of anything!  Fish, big dogs. . . 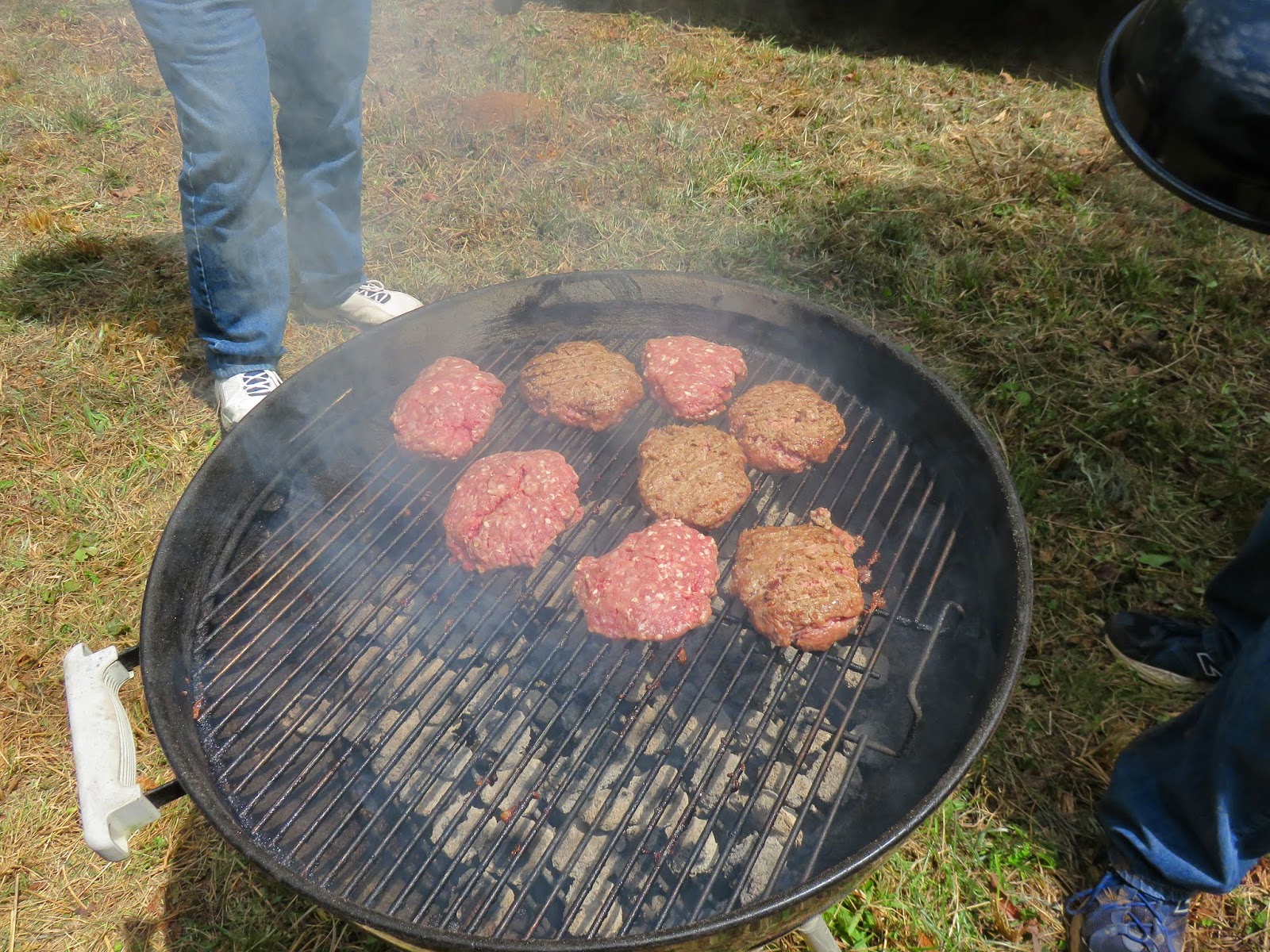 The last of the burgers on the grill. 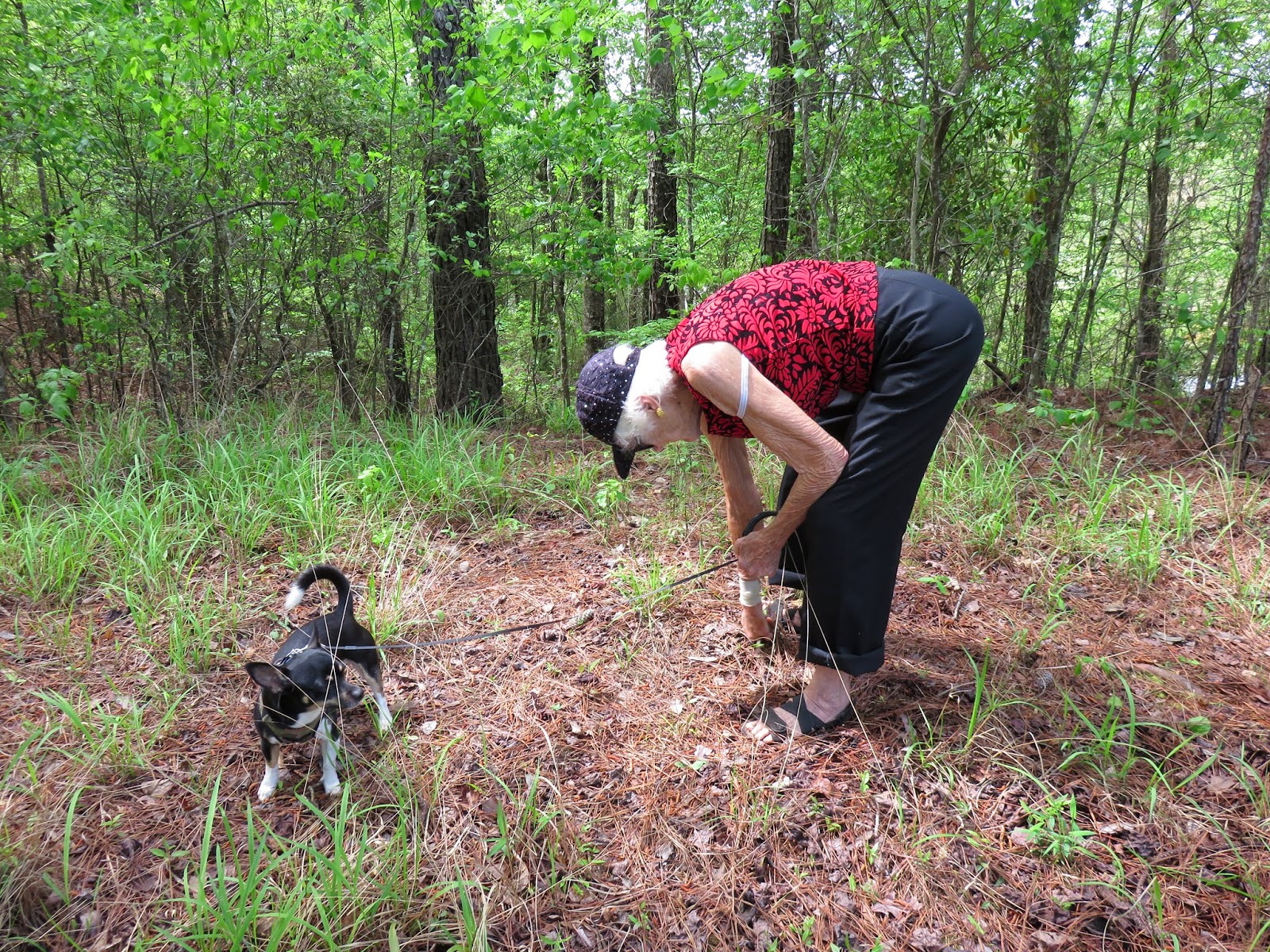 At 93, Aunt Ilene is still pulling weeds!  "You've got to stay active" is her advice. 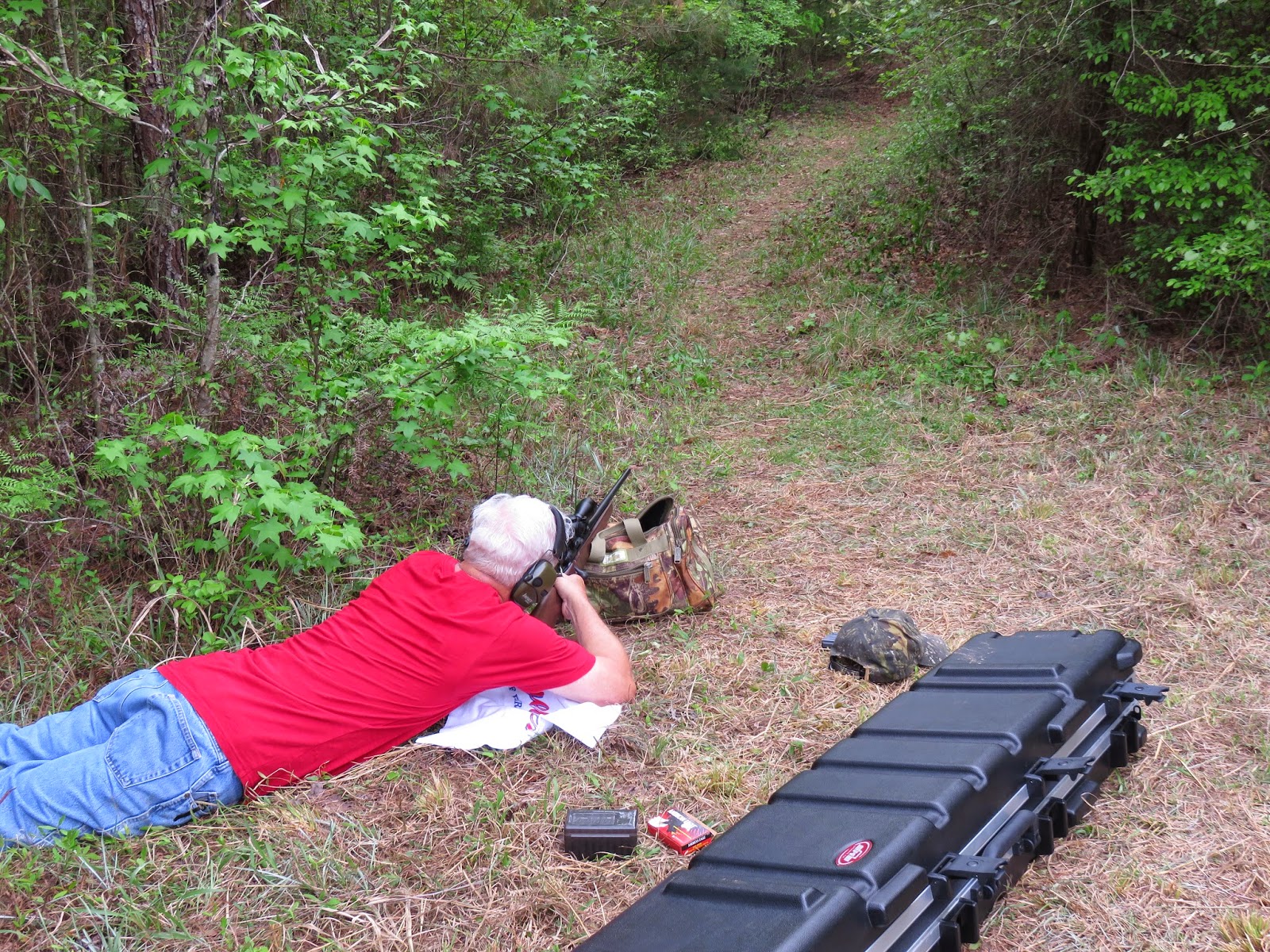 Kenny adjusting the scope on my rifle. 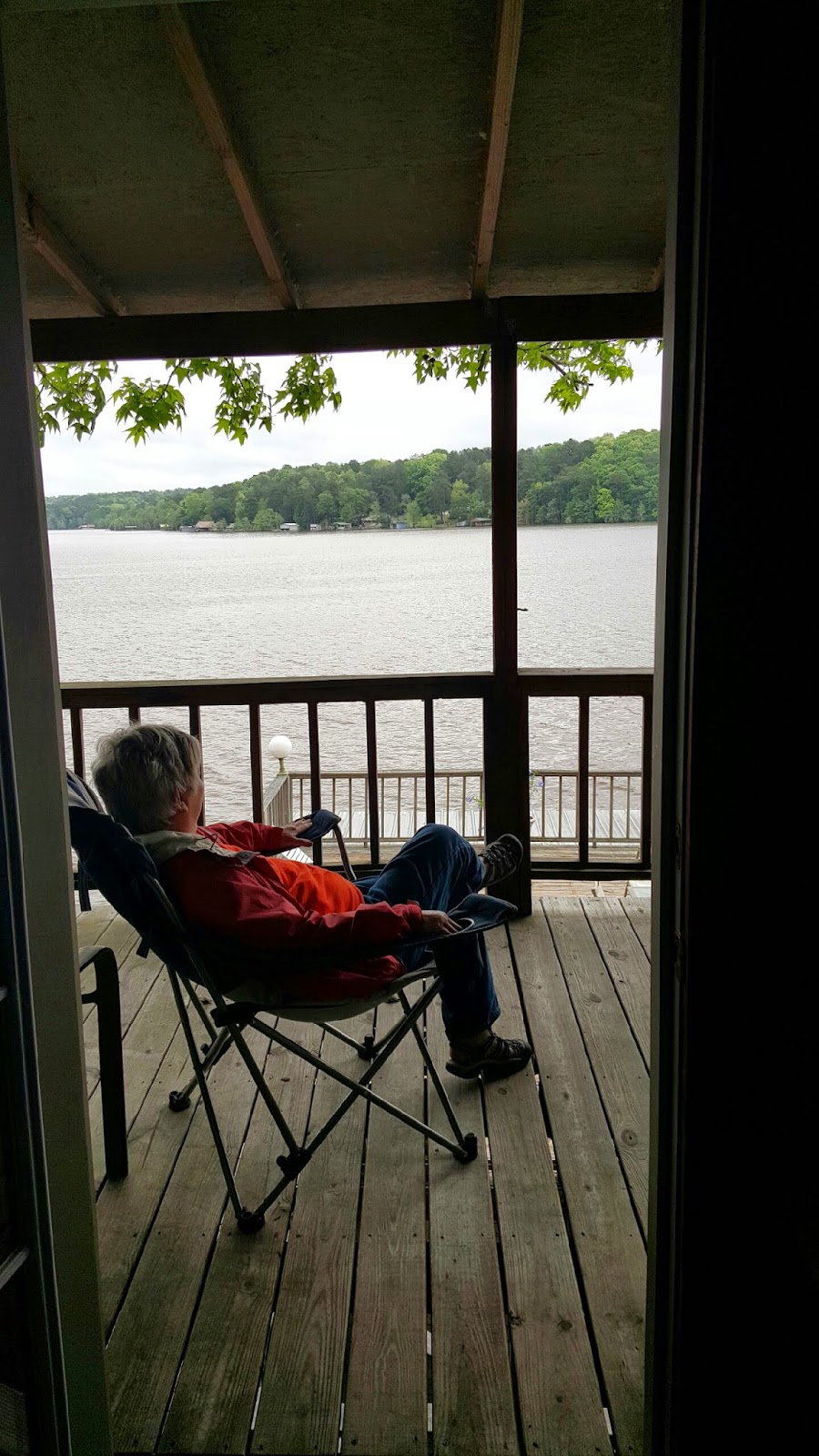 After the reunion, some of us spent a couple of days "at the river."  Kip's parents let us stay at their vacation home and we really enjoyed the tranquility of sitting by the water and watching the world go by!

These pictures don't begin to capture the fun we had.  This was our 7th reunion and we'll be back next year for more.

My grandfather farmed this land and my dad and his siblings grew up here.  It is a refuge to gather and just be ourselves with no political correctness required and a brief escape from the stress of the everyday world.

Every year in early Spring, my cousins and I converge on a small rural Alabama town where we own land that has been in the family since it was deeded from the government many, many years ago.  Our grandfather was a prosperous cotton farmer decades ago on the land.  I remember remnants of the cotton field when I was a small child.

My next post will have pictures of the day.

This is a trip I look forward to all year.  Some of us arrived on a Thursday, some arrived on Friday and by Saturday, all of us were there!

A few of us were at the property on Friday. I arrived first and was there by myself for about an hour before anyone else showed up.  I quickly unpacked my guns and target shooting stand and began hitting the bullseye!  If you are new to my blog, maybe you don't know that I am a "gun nut!"

Saturday was the big day.  There was fishing, more target shooting, hamburgers on the grill, and walking the land.  Our Aunt Ilene is 93 this year and just as feisty as ever.  We really have to watch her.  While she is in her right mind for someone that age, she thinks nothing of walking off by herself, through the bushes, briars, over downed trees, and mud!

Everyone gets one shot and whoever gets closest to dead center wins.

I could feel the adrenaline flowing in my veins.  Did I tell you I was one woman out of 5 guys?

I beat out the guys!  Yes, that made my day, especially when you consider Kenny is a sharpshooter!!!

I don't know where the time went.  In the blink of an eye, it was time to pack up and head out.  Not fair.

My cousin, Debbie, and I spent a couple of days at Rita and Kip's place on a large lake, about an hour drive from the reunion.  Kip's parents own this and it's a vacation home.  It's a nice home overlooking the lake with a covered deck right off the living room and a much larger one down the steps and over the water.  Kip took us on a boat ride up and down the lake on Sunday.  Then he grilled steaks for us.  What a treat!

Another fun reunion (this was number 7) was over and I drove north again for the two day drive back to Rochester.  Yes, a two day drive down and a two day drive back.  I really don't mind that.  I'm not a big fan of flying and with the gear I carry, flying is out of the question anyway.  I like to watch the end of winter up north turn into Spring, the further south I drive.  Ohio and Kentucky are particularly scenic.  Ohio, with its vast farm lands and old barns and Kentucky with its rolling terrain.
Posted by Sherry at 8:27 PM No comments: